First of all, I want to put to rest the idea that the world is coming to an end at the end of this year. That is not what this year is all about. Earth is preparing to ascend to a higher dimension, a higher level of consciousness, and to start down the path of The Golden Age, when we’re supposed to have 1000 years of peace. So if anything is ending, it’s our old way of life. We’re going to stop seeing life as a win-lose proposition. We’re going to give up competing with each other and unify via collaboration. Even our diversity will be a plus. It takes many perspectives to get a complete picture.

Now what does it mean when I say the Earth is going to ascend to a higher dimension? For one thing it means that the Earth is raising its frequency or vibration. There are lots of stories out there about how the Earth is going to ascend. I can tell you this for certain: NO ONE knows for certain what is going to happen or how. There’s a possibility that our normal 3rd dimensional Earth, on which we now live, could have a discontinuous event. This is what David Wilcock says is suggested in The Law of One by Ra. David Wilcock is a psychic, who is generally believed to be the reincarnation of Edgar Cayce. The Law of One says this will happen between 2011 and 2013.

So yes, there’s a possibility that the Earth we live on now would not be available to us in the future. However, if that happened, then that would mean that the Earth would also shift to a higher dimension, such as 4th or 5th dimension and we would leave behind a lot of negative energies, especially control and power issues. We would start working together to achieve peace, harmony and balance.

If the Earth shifted to a higher dimension, what does that mean about us? It means we need to focus on living from our hearts, instead of our heads. It means we’ll make our best decisions when we’re in our hearts, and we’ll learn to love ourselves and others, so that we can create a prosperous and healthy Earth for everyone. Essentially what I’m talking about is how we need to raise our vibration too, in order to shift with the Earth into a higher dimension. That’s why I’m talking to you about living from your heart, and loving both yourself and others. Love is a very high vibration. The more we can keep ourselves in love and joy, the higher our vibration will be.

I also want to remind you that Kryon, the Earth’s Magnetic Master, channeled by Lee Carroll has sent us a different message. He reminds us that we have changed the course of history because we have changed our consciousness so much. So there will never be an Armageddon, because that timeline is long gone and we didn’t take it.

In addition, Kryon asked us, in essence, and I’m paraphrasing, “Do you think we would go to all this effort to raise your consciousness, change the Earth’s magnetic grid, and all the other efforts we did for this purpose, just to destroy the Earth?”  Of course not!! That would be crazy. So first of all, I want you to stop thinking about the end of the Earth and focus on getting yourself prepared for changing dimensions. Do whatever it takes to live from your heart and in joy as much as you possibly can and you will be ready to ascend with the planet.

Now what keeps us from doing that? FEAR! False Evidence Appearing Real. FEAR is what’s being thrown at us in spades. And why is that happening? Because those who are now in control will lose their control when we humans and the Earth ascend to a higher dimension. So I ask you to turn away from fear and instead choose to focus on what you want to create.

There are some potentially disturbing and crazy possibilities ahead of us for the rest of this year. One that seems crazy to me is a report that the US military is going to have War Games in Denver with the Russian military. And they will be training the Russians on our equipment and in our facilities, etc, for the purpose of having an anti-terrorist training for these war games. Now where can you find that article? It’s at  www.whatdoesitmean.com and it’s a report titled US Calls For Russian Airborne Troops To “Take And Hold” Denver Airport. This is supposed to occur in May, right after a Solar Eclipse on May 20th, and during the very intense Venus retrograde we have from mid-May to the end of June.

There are other possibilities too. One of them is that all the major currencies in the world are likely to be revalued this year. My guess is that if this is going to happen, they will do this before the election, to help throw the election to the Republican candidate. Astrologically this could occur in late June or very late September. I’ve mentioned this unconfirmed rumor before. It seems that all the currencies are going to be revalued according to the assets of their country. The rumor is that the US dollar will be devalued by 40%. There’s no way to prove this, but considering the terrible shape the dollar is in, and that it can only go lower until we significantly lower the US debt and trade deficit, I recommend you buy some gold coins. Save money in the form of gold. This is known as wealth preservation. You can learn more about how to do that with an article on my site, How to Buy Gold.

Now I’ve just mentioned two situations that could create a lot of fear in people. And there are other possibilities that can also create fear and uncertainty. Why is this happening? Because there are some people who do not want a Golden Age of Peace to begin. So they do their best to prevent it from happening by keeping people in constant fear and off track. It’s time we wise up to this stuff and stop playing into their hands. I recommend that people buy gold, because it’s the best way I know to beat those guys at their own game, and give yourself some peace of mind. That way you don’t have to be in fear of whatever financial game they’ll play on us next. No matter what happens, you’ll preserve your wealth.

This is also the year that we have the first two peaks of our revolutionary energies. So we could see some very unusual and unexpected events. Yes, we could see full disclosure about extraterrestrials being on this planet, but will we see Obama introduce us to our ET ancestors? Probably not, although he’s probably met them. What’s more likely in my estimation is that we could have a major “kill shot from the Sun” as Major Ed Dames calls it, and it could take out power grids in the part of the world that gets hit with the big coronal mass ejection. What would happen then? My guess is that finally the new free energy units would be put to work and they would essentially save the day. Once that happened, there would be no way to hide this technology from the public and we’d be off to funding and using a new form of non-polluting technology.

Yes we could be in for a bit of a wild ride getting to the end of the year. Some of that could include weather wars, which have been going on now for awhile, with weather modification being played by multiple countries. We could have major earthquakes, major volcanoes erupt, huge hurricanes and tornadoes, or enormous fires. But why do these things occur? We feed them with our fear. When there’s enough fear in the population, the Earth has to release those negative energies and so we get major Earth changes. What would happen instead, if we just chose to feel peace, harmony, joy, happiness, or love? We can consciously choose what we focus on and how we feel.

This year our choices for what we feel will make an enormous difference to what we create for our future. The ascension of the planet and our own ascension to a higher dimension with the Earth depends upon what we choose to focus on. We can continue to stay in fear and anxiety, or we can divert our attention to creating a world filled with peace, joy, prosperity and love. So here are the steps I recommend taking to prepare for the rest of this year.

First, get some gold coins if possible. You may also want to invest in Iraqi Dinar, which looks like you could make some unprecedented wealth by doing so. I bought my Iraqi Dinar from www.SterlingCurrencyGroup.com. You are welcome to contact me if you want to know more about that.

Next, release old issues, anger, frustration, and old patterns that keep you locked in self-defeating behaviors. You can do this by getting an Emotional Freedom and Healing release or other forms of release. On my site, Peg Donahue does Emotional Freedom and Healing releases. They take about an hour, and they release at the cellular level. Whatever you release is permanent.

Lastly, and most importantly, keep yourself positive. Focus on whatever brings you joy, peace, love, and harmony. Forgive yourself and others for whatever may have happened in the past, so you can allow yourself to thrive! The Universe will support us and we’ll ascend together with the Earth to a new life.

Madeline Gerwick is a certified business and personal astrologer. Her background includes a BA degree with honors in economics, and over 15 years of industrial marketing and sales. She’s listed in several Who’s Who books, including Who’s Who in America, and produces The Good Timing Guide: Better Business Through Better Timing. She also co-authored The Complete Idiot’s Guide to Astrology and The Pocket Idiot’s Guide to Horoscopes, both available from Macmillan Publishing. Her astrology background includes over 20 years of study and practice. She can be reached by phone in Seattle, WA at 877-524-8300 , by email at mgb@polarisbusinessguides.com

As a Bonus, Receive 2 Free Gifts:

~ MindShifts Video Series:
7 Powerful Videos to Show You How To Create Greater Prosperity 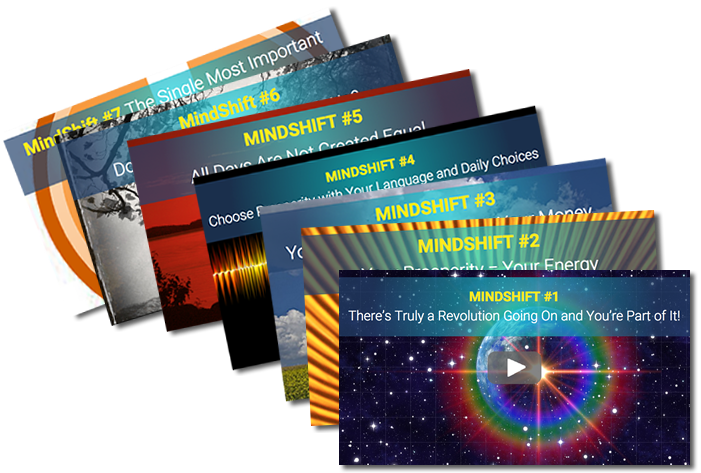